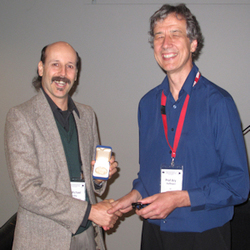 Dr Michael Braby is Entomologist/Invertebrate Conservation Biologist, at the Biodiversity Conservation Division, Department of Natural Resources, Environment, the Arts and Sport in the Northern Territory.

Michael gained his B.Sc. (Hons) in zoology at La Trobe University (1987) and a PhD in entomology at James Cook University (1995). He initially worked at the Plant Research Institute, Department of Agriculture and Rural Affairs in Melbourne, following which he took up a position at CSIRO Entomology in Canberra.

This was followed by postdoctoral positions in Harvard and at ANU before he moved to the Northern Territory as an Invertebrate Conservation Biologist.

Over his research career, Michael has been highly productive with more than 100 research papers and around 1000 ISI citations. His area of work has been mainly butterfly systematics, evolution and ecology. He produced the magisterial, 2 volume Butterflies of Australia (2000: 976 pp.). This is the primary reference work on this significant group of insects and will be so for years to come. This book won the 2001 Whitley medal for best book on the natural history of Australian animals, and Michael has also won several other prizes including an award from the Entomological Society of Japan.

Michael has led field expeditions to several remote areas including Cape York Peninsula, Papua New Guinea, and Central and South America and he is currently involved in developing a database for threatened invertebrates in northern Australia along with plans for their management and recovery.

In selecting Michael as a worthy candidate for the Ian Mackerras medal 2012, the Society recognises, particularly, his seminal contributions to Lepidoptera taxonomy and ecology.